The Overseas Highway in The Florida Keys: From Flagler's Railroad to recently designated "All American Road" 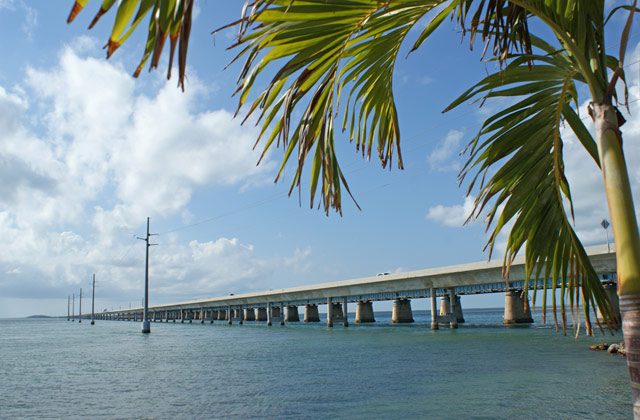 Florida Keys sightseeing starts at the first and only road for getting to the Keys, a famous destination drive for visitors eager to travel the 113-mile distance. Part of the last southern stretch of US1, this scenic highway connects the mainland from Miami to the farthest national coastline in Key West.

The highway began first as a railway meant to make business easier for its founding developer. Henry Morrison Flagler’s legacy railroad began as a means to connect his string of Florida hotels along the state’s sparsely developed east coast. A bold plan that would take an incredible amount of years and funds to finish, and was not fully completed until January of 1912, when Flagler was 82 years old.

The railroad’s success proved that ground transportation was possible for the waterways surrounding the keys, and its failing repairs after a powerful hurricane made building an official highway necessary. The state’s transportation department began work to connect separate pieces of roadways with a series of bridges and structural improvements. By 1938, the first series of projects were completed and opened up entirely new opportunities for motorists and business for Florida’s southernmost islands.

Honored As An "All American" Road

Over the decades, ongoing improvements and technological advancements have continued to make the famous highway a unique and rewarding highlight for things to do in Florida Keys vacations. Designation as an All American Road in 2009 cemented the highway’s status as a modern national treasure.

Driving the full length of the ocean highway — or for some, just the daunting expanse of the Seven Mile Bridge — is the first of many Florida Keys attractions they’ll enjoy.