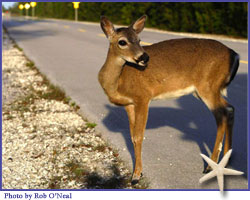 The Key Deer, member of a sub-species of the Virginia white-tailed deer, is found nowhere else in the world. It is thought that they came to the Keys from the mainland across a long land bridge and were isolated from their relatives, somewhere from 6,000 to 12,000 years ago, when the Wisconsin Glacier melted. The waters rose and divided this land bridge into the islands of the Florida Keys.

The first documented mention of the Key Deer was in the memoirs of Hernando Escalante Fontanada, a 13-year-old Spanish sailor who was on his way to Spain from Cartagena, and was shipwrecked near "Cayo Vaca", the mordern-day Marathon area. Fontanada was captured and held captive by Indians for about 18 years, until he was freed and allowed to return to Spain with crewmembers of a passing ship.

Once roaming from Big Pine Key to Key West, the Key Deer was hunted by locals and ship crews alike. There were no laws to control this hunting until, in the 1940s, the Key Deer population numbered less than 50. The establishment of the National Key Deer Refuge in 1957 provided for protection for the deer and their habitat. As a result, the population has increased to between 600 and 800. Today, the deer are known to live on Big Pine and some small surrounding islands, most of them centering on Big Pine and No Name Keys.

Sometimes known as "toy deer", the Key Deer's average height is between 24-32 inches. Does average about 65 pounds and bucks around 85 pounds. The color of their fur ranges from a reddish brown to a slate gray. Mature bucks shed their antlers between February and March, and they begin growing a new set almost immediately.

Key Deer are herbivores and spend about half of their time searching for and eating leaves from plants of their choice, like red, black, and white mangroves, hibiscus, and gumbo limbo, as well as berries from the thatch palm. Of course, they require fresh water, which is present on Big Pine. They can drink brackish water but can only tolerate small quantities of salt in their systems.

Their breeding season occurs between September and December, although some breeding can occur as late as February. During the "rut", bucks fight with each other using their antlers, the winner gaining dominance and the right to breed. The gestation period is 200 days or around 7 months. Most fawns are born between April and June and weigh, at birth, between 2 to 4 pounds. Adult females average one fawn per year.

The population is growing at a rate of between 1% to 3% per year. Man is the biggest danger to their existence. Feeding the deer is discouraged and illegal, as it makes them lose their fear of humans. This makes them easy prey for poachers. The act of offering them food attracts them to roads and highways where they can be killed by passing motorists. Giving them food unnatural to their systems may affect their behavior, reproductive capability, and even their appearance. As public feeding is usually centered in areas of higher population, like subdivisions, the deer are more exposed to accidents like drowning in canals, entanglement in nets and fences, and harassment and attacks by dogs.

You can almost always count on seeing Key Deer along the sides of the Overseas Highway as you approach Big Pine from the east. Long Beach Road is the eastern border of the Key Deer reserve, and you can often spot deer there. The neighborhood areas at the end of Key Deer Boulevard on Big Pine Key are also a sure bet. And, a ride out to No Name Key should also assure you of a sighting.

The experts say that the deer are most active in the early morning and at night, beginning in the early evening. But they are really spotted at all times during the day. The best, and most legal way, of viewing them is to stay fully in your vehicle. Do not approach them on foot, extend your arms to them, or try to call them to you. The deer are wild animals. Do not treat them, or expect them to behave, like pets.