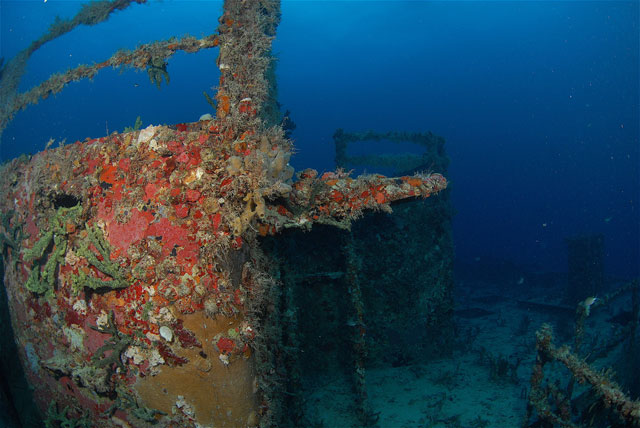 The Florida Keys National Marine Sanctuary is working on an emergency closure of the site while it assesses the ship's stability and its general condition. Workers will be removing the mooring buoys temporarily, sanctuary spokeswoman Cheva Heck said.

The shifted position of the 510-foot ship comes as a surprise because the area experienced minimal tropical-storm force winds during the passage of Hurricane Dennis on Saturday.

On Monday, a boat from Key Largo dive shop Ocean Divers visited the former Navy ship, which was scuttled in 130 feet of water May 17, 2002. When divers arrived at the site six miles offshore, they saw that several mooring balls were missing.

The dive boat tied off on one of the three remaining moorings and instructors Bob Snyder and Steve Schalk descended the mooring lines. At 90 feet, Schalk said he saw nothing and came to the surface. Snyder, who descended to the ship's bow, was stunned by what he saw.

"I was in shock," he said Monday. "I had to ask myself, 'Am I narcked [suffering from nitrogen narcosis]?' There was only 10-foot visibility, so I dropped down 10 feet and I could see both sides of the ship. It was sitting upright." 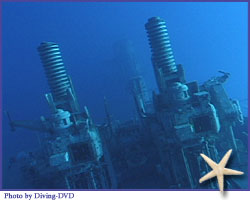 June 2002 - The 510-foot Spiegel Grove arrived off Key Largo Tuesday for the final countdown until its scheduled sinking Friday.

The retired U.S. Navy ship will be the largest ship in the world ever purposefully sunk as an artificial reef, and will become a dive attraction Key Largo Chamber of Commerce officials expect to attract 50,000 to 70,000 divers each year, for an economic influx of $14 million. This event was eight years in the planning.

The eight-story ship will rest 40 feet below the water's surface in the Florida Keys National Marine Sanctuary six miles off Key Largo in 130 feet of water.

Project organizers for the Key Largo Chamber of Commerce Artificial Reef Committee plan to sink the ship, decommissioned in 1989, Friday afternoon. It is being held in place with four anchors while volunteers cut four-by-four diver access holes in the decks and sides. About 45 were cut before the Spiegel Grove left Bay Bridge Enterprises shipyard in Chesapeake, Va.

She looks right at home anchored six-and-a-half miles offshore near Dixie Shoal, awaiting her date with the deep today. 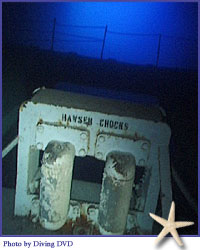 The 510-foot Spiegel Grove, the largest ship ever purposely sunk as an artificial reef, was a long time coming, but her arrival offshore Tuesday began the final chapter of a long and sometimes difficult odyssey.

Thanks to a handful of dedicated (and often hard-headed) local men, the 47-year-old ship was taken away from a mothballed fleet on Virginia's James River and towed almost a thousand nautical miles to become an artificial reef off Key Largo.

Dive shop owners Spencer Slate, Rob Bleser and Doc Schweinler, along with photographer Stephen Frink and banker Bette Brown, have invested countless hours and energy into the project as members of the Key Largo Chamber of Commerce's Artificial Reef Committee.

The chamber, with major financial backing from First State Bank, TIB Bank of the Keys, Community Bank, the Tourist Development Council and the Monroe Board of County Commissioners, deserves a huge "thank you" from the entire Florida Keys community for its efforts.

A special thanks to former Florida Keys National Marine Sanctuary Manager Bill Harrigan, who selected the Spiegel Grove from among scores of ships in the MARAD mothball fleet at Hampton Roads. 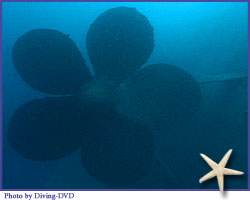 Thanks also to the local men and women who volunteered to weld, torch and man pumps aboard the ship as it awaited this day. Because folks have purchased close to 400 commemorative gold dive medals at $250 apiece (there are still 600 left), and because dive shops will sell plastic dive medallions for $10 apiece to their customers to help pay for the project, this has truly been a community effort.

The Herculean efforts of those men and women mentioned above, and many more who have worked behind the scenes - such as Kevin Senecal, president of Divers Direct, the company that underwrote a $250,000 guarantee that allowed the project to move forward when it stalled last fall - transformed what had been a dream into reality.

Today, after almost eight years of planning, countless trips to Virginia and a few setbacks, the Spiegel Grove finally assumes a new incarnation as an marine habitat and dive attraction.

The efforts of those involved in the project should pay off royally in the months and years to come.

Dive magazines, TV shows and other publicity about the ship will help attract divers. The financial payoff to area hotels, motels, restaurants, gift shops, state parks and other attractions will come directly from the fact that the largest intentionally sunk ship in the world lies just on the edge of the Atlantic Ocean.

Possibly the greatest boon this old ship brings is ecological. Its cavernous cargo hold will serve as "affordable housing" for literally millions of sea animals, from algae to reef sharks, from pinfish to Goliath grouper. It is hoped that coral will grow on and in the Spiegel Grove and will provide great relief to nearby heavily visited natural coral reefs.

Everyone benefits. Fish, divers, coral, local merchants. As the bow slips slowly under the surface today, it marks the end of the long hard effort to sink a ship and marks the beginning of what everyone hopes will be fun, safe and exciting diving that the Florida Keys can share with the world.

An eight-year dream turned upside down Friday morning when the former Navy ship Spiegel Grove sank prematurely in 130-feet of water, turning belly up with her bow jutting 50 feet out of the water.

The 510-foot, 6,880-ton ship, scheduled for a 2 p.m. sinking six miles offshore in the Florida Keys National Marine Sanctuary, slipped under the surface at 10 a.m.

Volunteers had been filling 110 ballast tanks with seawater since late Tuesday to help lower the stern in preparation for sinking. About 40 people were aboard the ship.

The plan was to have it sit as low as possible before explosives blew open the engine rooms. The explosives had not been brought aboard when it went down. Volunteers had been torching, welding and manning pumps since early Wednesday morning. All were evacuated to safety, and there were no injuries.

The Spiegel Grove is ready to rock and roll, says the salvage company hired to right the would-be artificial reef and give it a proper sinking. But the sun sank Sunday on a barnacled - and still overturned - bow and talk of working through the night to complete the job that began May 17.

That's when the 510-foot retired Navy ship sank upside-down, hours before crews had planned to scuttle it. The ship lies partially floating in about 130 feet of water, its bow protruding above the sea, about six miles off Key Largo.

An elaborate operation to overturn and sink the ship was first delayed until today, then moved up to Sunday under the threat of an approaching tropical wave. That wave rolled in earlier than anticipated.

Joe Farrell, president of Resolve Marine Group, was on the radio Sunday giving directions to his crew and the two tug boats that arrived on the scene early that morning.

The current is expected to help move the ship and as it turns and the air bags expand. With luck, the tugs will pull it into and an upright position before it settles back down to the seabed.

At 6 p.m., Farrell announced that the actual lift would probably not be made on the ship until around 1 a.m. to 3 a.m. this morning. This was predicated on the amount of air they still needed to pump into the air bags and ballast tanks, and the direction of and speed of the current.

Salvors and project organizers had hoped the new artificial reef could be positioned on the seabed in a fully upright position. But with the chance of rolling the ship another 90 degrees estimated at only 20 percent, the decision was made to leave the vessel resting on its starboard side.

Less than six months after the Spiegel Grove was sunk off Key Largo, several fish populations have moved into the area.

Even before the ship was all the way to the bottom, divers had reported seeing juvenile purple reef fish, blue runners, numerous planehead filefish, bluelip parrotfish and striped grunts.

The Spiegel Grove is the largest ship ever intentionally to be made into an artificial reef. The retired Navy transport ship sank prematurely and rolled over May 17 before being finally placed on its starboard side on the bottom June 11. Since then, many divers have seen increasing fish diversity.

As part of the permit to place the Spiegel Grove into the Florida Keys National Marine Sanctuary waters, Reef Environmental Education Foundation was asked by The Upper Keys Artificial Reef Foundation to conduct pre-deployment and periodic monitoring of the wreck and adjacent natural and artificial reef sites.

"Diving on the Spiegel Grove as part of REEF's AAT has been an eye-opening experience for me," said Dave Grenda, a REEF volunteer. "Witnessing the sequence and speed of fish recruitment on the Spiegel Grove has been surprising. REEF's monitoring efforts has resulted in some interesting findings along the way - like how quickly certain parrotfish and filefish have made this ship their home."

To date 39 expert and 14 novice surveys have been conducted on the Spiegel Grove. Over 125 species of fish have been documented, including a resident Goliath grouper, mutton snapper and black grouper, as well as many bluehead wrasse, tomtates, bar jacks, bicolor damselfish, ocean surgeonfish, round scad, stripped grunts and others.