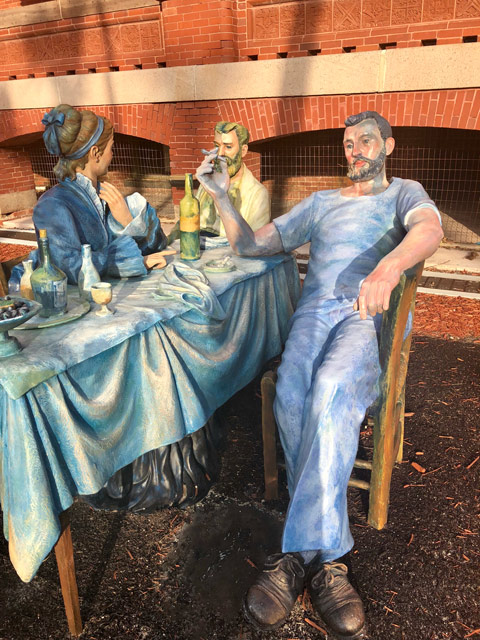 A bohemian vibe dances through Key West and its historic buildings and streets. From painters, poets and playwrights to singers, songwriters, actors and authors, every branch of the artistic tree is represented in this southernmost city. You’ll encounter the homes and haunts of Ernest Hemingway, Tennessee Williams, Winslow Homer, Mario Sanchez, naturalist John James Audubon and singer/songwriter/author/business mogul Jimmy Buffett.

Enjoying an escape from the cold winters of Maine where he lived, Winslow Homer wintered in Key West during 1886 and 1904. Here he painted watercolors with tropical or nautical themes. Some of his most famous and reproduced Key West paintings are Palms in the Storm, Hauling in Anchor, and Taking on Provisions.

Mario Sanchez is one of America's greatest folk artists. He was born in Key West to Cuban immigrants and grew up in Gato Village, an area named after the cigar factory that gave employment to many of its residents. Sanchez began carving and painting in the 1930s. His colorful scenes of old Key West are historically accurate and wonderful to behold. One of his most famous was Cary Grant, who came to Key West in 1961 to film Operation Pettycoat. He so loved Sanchez' work that he bought a couple of carvings for himself and his friend Spencer Tracy. Two of his carvings appear in another Grant film, A Touch of Mink. Although he is considered a national treasure, Mario is at home here in Key West, where he still works every day in his Catherine Street studio.

John James Audubon was a famous naturalist and painter of exotic birds. He came to the Florida Keys to study the flamingo. When Audubon discovered a new bird specimen, he killed them, ran wires through their bodies, and arranged them in poses. It is strange to learn that Audubon loved shooting birds. The flamingo seemed to be a favorite and he once killed one, preserved it in rum, and had it shipped to his studio in Charleston, where he finished sketching the bird. Audubon wrote journals, letters and a book entitled Ornithological Biography, which details how the Florida Keys appeared in the early 1800s. While in Key West, he was a guest of Capt. John Geiger, the city's harbormaster. The Geiger house has been restored and is known today as the Audubon House Museum. 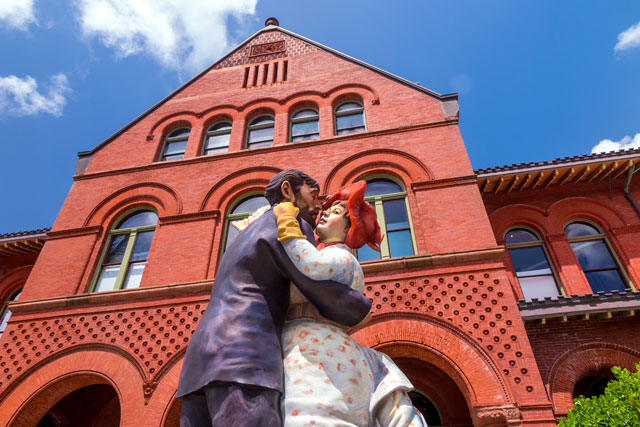 Great Key West Writers
Ernest Hemingway arrived in Key West in April, 1928, with his second wife, Pauline Pfeiffer. Ernest was a struggling writer, just divorced from his first wife, Hadley Richardson. Pauline was pregnant with her first child, Patrick, and wanted him to be born on American soil. A second son, Gregory Hancock, was born three years later. (Hadley bore Hemingway one son, John "Jack" Hadley Nicanor Hemingway.) Pauline was the daughter of a wealthy Arkansas family and niece of perfume king Gus Pfeiffer. As a wedding gift, Uncle Gus bought the Hemingways a new car and, later, the beautiful old Civil War era home at 907 Whitehead Street, the first Ernest had ever owned.

While in Key West, Ernest wrote parts of A Farewell to Arms, and Death in the Afternoon, The Green Hills of Africa, and a short story, The Short Happy Life of Francis Macomber, in their entirety. He wrote his only novel set in the United States, To Have and Have Not, after he left Key West. Many of its characters were Key West locals who might have been angry at his portrayal of them.

Ernest's lifestyle in Key West is legendary. He wrote well, drank hard, was a game fishing enthusiast, and had a great love of boxing. He spent a lot of time in Sloppy Joe's bar, located at the current site of Captain Tony's on Greene Street. Sloppy Joe's was a rough place where drinks were cheap and fights were common.

In 1935, a tourist guidebook published a map, which listed Key West tourist attractions. Hemingway's home was on that list, and he soon became angry that he couldn't walk around his hometown without being accosted by tourists. So he hired a local bricklayer to build the red brick wall that surrounds his home to this day.

Wedded bliss did not last for the Hemingways. Ernest met his third wife at Sloppy Joe's; she arrived in attire she felt sure would attract him. Her name was Martha Gelhorn, a writer who traveled the world, covering wars and major disasters for several magazines and newspapers. Shortly after this meeting, Hemingway traveled with her to Spain to cover the Spanish Civil War. Pauline knew about the affair and hoped it would run its course. In a desperate attempt to lure her husband back, she built Key West's first swimming pool in their garden for $20,000, which today would be equivalent to $250,000. But Ernest could not be persuaded to stay with Pauline and, at Christmas in 1939, he packed up his clothes and officially moved in with Martha. Pauline remained with her sons in Key West until her death in 1961.

The newly married Hemingways moved to their new home in Cuba, the Finca Vigia, located 15 miles outside of Havana. Ernest was married to "Marty" for only five years. In 1946 he married Mary Welsh, who was with him until the day he died, by his own hands, in 1961 at their home in Ketchum, Idaho.

The Hemingway House is today Key West's number one tourist attraction. Guided tours are interesting, but not always factual. But this is not as important as the surroundings are. The house, gardens, and studio are wonderful and remain pretty much as they were when "Papa" lived there.

Tennessee Williams arrived in Key West in 1941, when he was 30 years old. He came here to write plays and swim - the former exhausted him and the latter relaxed him. Born Thomas Lanier Williams in Mississippi, his father was a traveling salesman and his mother a "Southern Belle" transplanted from her birthplace: Ohio.

After his first major success, The Glass Menagerie, and his second, A Streetcar Named Desire, he had enough money to buy a home in Key West, a one-and-a-half story Bahamian at 1431 Duncan Street. Although he loved it here, he spent most of his life in a series of hotels and rented apartments at other locations in the United States and Europe.

For some reason, Tennessee's brother, Dakin, persuaded him to be baptized at St. Mary Star of the Sea Catholic Church on Truman Avenue. A local photographer who was there for the event said Williams was very intoxicated.

Toward the end of his life, Tennessee gave up writing for painting, a less harsh way to express himself. Critics didn't think as much of his painting as his plays, but many people clambered to own the framed treasures.

Williams met Key West's other famous writer, Ernest Hemingway, only once. They were introduced at La Floridita, Hemingway's favorite bar in Cuba. Williams was concerned about the meeting because he heard that "Papa" was homophobic. He needn't have worried, however, because they found common ground in their health concerns; Williams talking about liver problems, and Hemingway about plane crash injuries.

Tennessee Williams lived into his 70s. He died in February, 1983, when he actually inhaled and choked on an eyedropper bottle cap. When word of his death reached Key West, The Rose Tattoo, a locally filmed movie based on a Williams play, ran all afternoon and evening at an alternative cinema on Duval Street.

Tennessee's house on Duncan Street remained vacant for many years. A group of Key West writers made plans to purchase it and make it into a shrine to their friend, but it never happened. The property was sold in 1992 and has been totally renovated.

Poetry Set to Music
When people think of Key West, they automatically think of Jimmy Buffett. To many, the two are synonymous. Jimmy's songs conjure up pictures of tropical seas, palm trees, and margaritas. His appeal has not faded with time, and his fans are not bracketed into any specific age group. People from all places, of all ages, and from all backgrounds love to have fun, and many people think Buffett has the recipe. His songs are often wild and crazy, but many are simply poetry set to his own brand of music. Jimmy Buffett concerts are wildly entertaining, and Parrot Heads from miles around attend.

Jimmy was born in Mobile, Alabama, on Dec. 25, 1946. He was an avid reader, and many books he read in his youth greatly influenced his philosophy of living. Mark Twain and Robert Louis Stevenson were two of his favorite authors, and many of his songs contain themes from their books. After 12 years of Catholic education, Jimmy went on to college and, while he was there, he spent as much time as he could in New Orleans where he strummed his guitar and sang in clubs on Bourbon Street.

After he graduated, he married a Mobile beauty queen and headed for Nashville where he planned to continue writing and performing his music. He was turned down by numerous record labels so, in order to make ends meet, he took a job with Billboard Magazine. He was disgusted with his lack of success, and unhappy in his marriage, so he decided to divorce and leave Nashville. A musician friend, Jerry Jeff Walker, talked him into coming to Key West.

Jimmy's first stop in town was the Chart Room at the Pier House. The story goes that he gave his first Key West performance right there. In 19 72, Key West was not yet the tourist mecca it is today. This was the decade of marijuana smuggling and the offbeat characters who plied the trade were numerous. Living was cheap and drinking was a favorite sport, not that the latter has changed much over the years. What Jimmy couldn't do in Nashville, he did very well in Key West. In 1973, when he was 26 years old, Buffett recorded his first successful album, A White Sport Coat and a Pink Crustacean. A star was born.

In 1977, Jimmy married Jane Slasvol. Although their relationship wasn't always the best, in recent years Jimmy has rededicated himself to Jane, with whom he has three children.

Although he's only had one number one hit, Come Monday, his albums and CDs are numerous and continue to be successful. He has been a favorite guest on many morning and late night shows. In 1985, Jimmy opened Key West's Margaritaville, a bar, restaurant, and outlet for his own line of clothing inspired by many of his famous tunes. Key West is also the location for the annual Parrot Head convention, a meeting of his most ardent fans.

Although Jimmy kept a home in Key West for many years, he currently lives in Palm Beach, where he is still an avid sailor. Jimmy's recording studio, however, remains here. Always ready to conquer new worlds, he has taken up flying, and often pilots his own plane to the far off places he still loves to explore.