The Dry Tortugas and Marquesas Keys 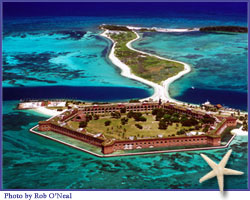 The Dry Tortugas were discovered by Ponce de Leon in 1513. It is thought he called the islands “Las Tortugas” as a result of all the turtles he caught there. The word “dry” was added later on as a descriptive due to the lack of fresh water on the islands. During the 17th and 18th centuries, these islands were used as a base for attacking shipping in the Gulf of Mexico and the northern Caribbean.

The Spanish Treasure Fleet of 1622

One of the worst disasters connected with the Spanish fleets took place in 1622 in the Florida Keys. Two days after a treasure fleet left Havana on its way to Spain, a terrible hurricane struck. Nine of these ships wrecked in the Keys; they included three treasure carrying galleons Nuestra Señora de Atocha, Santa Margarita, and Nuestra Señora del Rosario. The Rosario made it on shore in the Dry Tortugas but did not sink. The Atocha and Santa Margarita sank in the Quicksands to the west of the Marquesas Keys. Only five men from the Atocha and sixty-eight from the Santa Margarita survived. In total, there were 550 deaths.

Between 1622 and 1643, Spanish expeditions set camp on the Marquesas Keys as a base of operations for trying to locate and salvage the treasure they lost. The first group arrived just ten days after the disaster and found that Indian natives had already recovered some items and they had to bargain for their return.

In 1626, using a bronze diving bell with glass view ports, the Spanish located the Santa Margarita in about twenty-five feet of water. They were concerned, however, that the natives would interfere with their recovery operation. They promised them gifts in return for their agreement that they would not take anything but, when they returned the next year, they found the Indians had burned their camp and supplies.

When they returned in 1628, instead of trying to bribe the Indians with gifts, the Spanish salvage master, Francisco Nuñez Melián, got them involved. When he found out that their diving abilities were better than their own, they hired nine natives to help in the salvage attempt. They brought up thirty-seven silver ingots and many coins. But, some Dutch mariners arrived before they could bring more up from the bottom, and the Spanish fled for their safety.

The British Castaways of HMS Tyger

In 1741, England and Spain were at war. Capt. Edward Herbert of the HMS Tyger was ordered to capture or destroy any Spanish boats he could. For three weeks, he lay in wait off the west coast of Cuba without doing much damage. He learned from one of the crewmen from a small Spanish boat that he did capture that a Spanish force was about to leave Vera Cruz for Havana and another from Havana for Vera Cruz. After waiting for one more week without encountering one of the ships, Capt. Herbert decided to sail into the Gulf of Mexico. As he went in a general northerly direction and the currents of the Florida Straits took him slowly eastward. As dawn broke on January 12, some small islands were spotted to the northwest, which they took to be the Dry Tortugas.

At around 1:00 pm., the Tyger came upon a sloop that had been recaptured from the Spanish by a Rhode Island privateer. The captain of the sloop told Capt. Herbert that they were within sight of the Reques Keys, which lie on the western edge of the Grand Bahama Banks, almost two hundred miles to the east of the Tortugas. Thinking that the captain of the privateer had more experience, Capt. Herbert changed his mind as to where they were located. He released the privateer after transferring some food and water over to their sloop. Soon after, the Tyger ran aground about a mile and a half off Garden Key, modern home of Fort Jefferson. After several attempts to free the Tyger, her officers and crew left her, setting out for the dry land on Garden Key. It took them several days to ferry her guns and provisions to the island.

On January 18, Capt. Herbert ordered a crew of eight to take a longboat and sail for New Providence in the Bahamas to get help. Remember … at that time, they thought they were in the Bahamas. He ordered the rest of his crew to continue setting up camp and fortifications so they could defend themselves if another Spanish ship happened by.

On February 8, when there was still no word from the crew of the longboat, nine more crewmembers sailed away on a yawl in hopes of reaching New Providence. Eight days later, the yawl returned with word that, after they had sailed about 100 miles, they came upon a group of low lying islands which they were sure were the “islands on the Cape of Florida”, the current day Florida Keys. They now knew they had been stranded on the Tortugas.

On February 20, a Spanish Galley was spotted approaching the wreck of the Tyger. They were concerned that the galley was there to attack, but soon realized that they were simply removing the masts from the wreck for their own use. However, a couple days later, the same Spanish sloop approached the wreck, and a subordinate of Capt. Herbert’s, Lt. Dennis, decided to set fire to it and the Spanish left the site.

After about six weeks, the original longboat, along with another boat that had been abandoned by the Spanish, returned to Garden Key. Food and water supplies were, by then, diminishing. On the afternoon of March 7, the Spanish sloop was again spotted about five miles from shore. Capt. Herbert decided to attempt an attack, but it was unsuccessful.

At dawn on March 19, the officers and men of the Tyger boarded all their boats for the return to Jamaica, at Port Royal. Fifty-six days later, they reached their destination.

After the United States fought the British in the War of 1812, the U.S. government looked to build a group of forts to provide defense for the southern coastline of the country and the stream of commerce to and from the Mississippi River.

Lt. Matthew C. Perry, USN, took possession of Key West and the Florida Keys for the United States in 1822. As a result of several wrecks on the dangerous reefs that run the length of the Keys, Lt. Perry recommended that the government build some lighthouses to provide warning to sailors. In 1825, one of these lighthouses was built on Garden Key (originally Bush Key).

Construction of a fort, a six-sided building constructed of red brick, was begun in 1846. In 1850, the officers’ quarters for this U.S. military reservation were completed and it was officially named Fort Jefferson, after President Thomas Jefferson. The walls reached their highest height of 45 feet in 1862. The moat, a real engineering challenge, was not completed until 1873. The building of Fort Jefferson continued for over 30 years but it was never really finished. The invention of the rifled cannon during the Civil War made it possible for an enemy to destroy the walls of the fort, so it was somewhat obsolete before the construction stopped.

While the Civil War was still going on, and for a while afterward, Fort Jefferson was used as a prison for Union deserters and other criminals. The most famous of these was Dr. Samual Mudd who, possibly unwittingly, set the broken leg of John Wilkes Booth, President Lincoln’s assassin. Booth was later set free, by President Andrew Johnson, as a result of his humanitarian effort to treat and save inmates and staff of the prison during a yellow fever outbreak. By the time Mudd was pardoned, he was the only prisoner left at the fort.

In 1874, the army completely abandoned Fort Jefferson. In 1989, the navy occupied it for the duration of the Spanish-American War. In 1908 the area was designated as a bird reserve and transferred to the Department of Agriculture. On January 4, 1935, it was designated by President Franklin Roosevelt as Fort Jefferson National Monument. In 1992, the monument was upgraded to national park status in a bill signed by President George Bush.